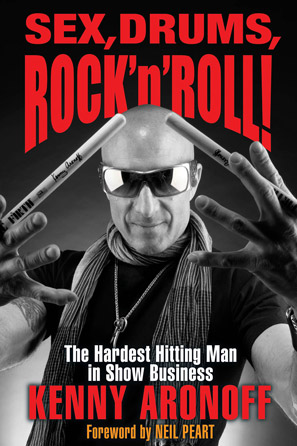 Introduction
1 “Hey, I Want to Be a Beatle!”
2 Norman Mailer and Norman Rockwell
3 “Purple Haze”
4 Ground Zero
5 From Vietnam to Indiana
6 Leonard Bernstein or . . . Rock ’n’ Roll?
7 Jazz Rock Fusion at the Roach Motel
8 Johnny Cougar
9 Kenny Gets Fired
10 Kenny Gets Fired . . . Again
11 “Jack and Diane”
12 Bona Fide
13 The Bunker
14 The American Dream
15 The John Mellencamp Football League
16 Scarecrow
17 “R.o.c.k. in the U.s.a.”
18 Americana
19 The Best John Mellencamp Band Drummer in the World
20 Welcome to Sessionland!
21 Bob Dylan, Iggy Pop, and Me
22 Blaze of Glory
23 Fired, Again!
24 Whenever We Wanted
25 Professor Aronoff
26 Melissa
27 Blue Moon Rising
28 Mellencamp—the End
29 I Can Breathe Again
30 Bill Clinton and the Rolling Stones
31 The Smashing Pumpkins
32 What Song Is It You Want to Hear?
33 Scammed!
34 The New Pop
35 A Little Piece of My Heart
36 Chickenfoot
37 Great Balls of Fire and the Kennedy Center Honors
38 Hail to the Chief
39 Dad
40 Meet the Beatles
Epilogue
Photographs

Voted by Rolling Stone magazine as one of the greatest drummers of all time, Aronoff is arguably the most sought-after recording and touring beat master ever.

Ignited by the Beatles' appearance on The Ed Sullivan Show in 1964, Aronoff's passion for drumming fervently grew and carried him from the kit in his childhood living room in the Berkshires to Bernstein at Tanglewood to Mellencamp, Etheridge, Fogerty, Smashing Pumpkins, the Rolling Stones, the Beatles – his heroes – and beyond.

But none of this would have been possible without his fierce work ethic and unique approach to drumming – an integration of all parts of his being, along with meticulous attention to note-for-note detail, feel, and what the song needs.

Both a leader and a team player in the mission to realize a greater good – an unforgettable recording, a riveting show – Aronoff brings it every time. Through any setbacks – heartaches, failures, injuries, or plain fatigue from the rigors of the biz – Aronoff has stayed the arduous and wild rock 'n' roll course. His tale of what is possible with unrelenting dedication to one's bliss is an inspiration to all.

Sex, Drums, Rock 'n' Roll! details Aronoff's youth in the Berkshires and the Midwest, from his early inspirations to his serious classical and jazz study, which gave him the foundation to be able to play – anything.

The failure of a first rock band in his early twenties had a silver lining: it freed him up for an audition that would change his life – John Mellencamp. His work with Mellencamp catapulted Aronoff to the top of the charts with such hits as “Hurt So Good,” “Little Pink Houses,” and “Jack and Diane” and paved the way for session and recording work with droves of remarkable artists: Melissa Etheridge, John Fogerty, Bon Jovi, Stevie Nicks, Smashing Pumpkins, the BoDeans, Paul Westerberg, Celine Dion, Iggy Pop, Elton John, Bob Dylan, Alice Cooper, Brian Wilson, Meat Loaf, Joe Cocker, and countless others.

In addition to his work as a world-famous recording and touring drummer, Aronoff finds time to be a dedicated teacher and has shared his expertise with students all over the world, teaching clinics for Tama and Zildjian.

Heading into his fourth decade of rocking hard, Aronoff shows no signs of slowing down. Featuring rare photos, testimonials from major artists and from those who know him best, a chronology of live performances, a discography, and a foreword by Neil Peart, this book is the story of one of the greatest musicians of all time.

We hope you're enjoying Sex, Drums, Rock 'n' Roll!: The Hardest Hitting Man in Show Business . If you have a moment, help us and the community by leaving a review. We appreciate your support!
Review Product